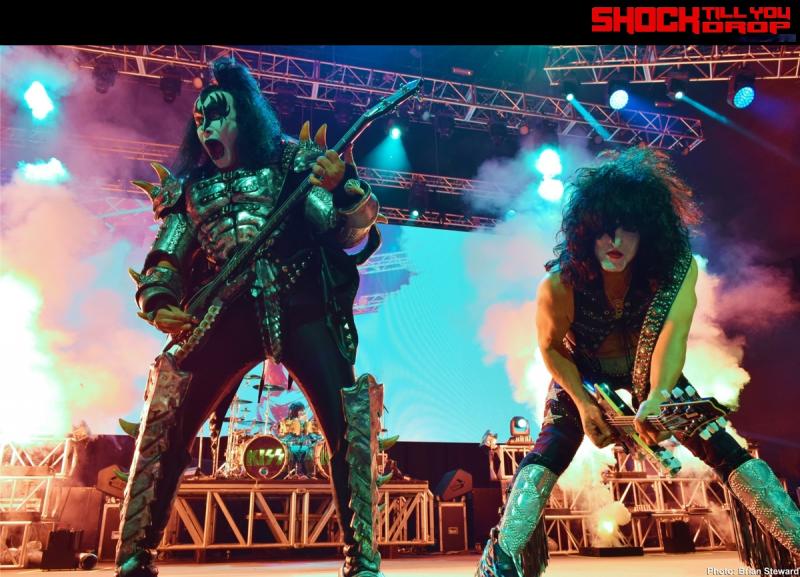 By Brian Steward / Shock Till You Drop

Like a well-oiled machine, the KISS Army followed its marching orders and made its way to Durant, Oklahoma this past Friday, January 29th.  The mission: storm the gates of the Choctaw Casinos Grand Theater.  The operation was an overwhelming success.  The show was a sold out spectacle like only KISS can deliver.  From the opening riff of Detroit Rock City, the capacity crowd was on its feet and the energy never let up for a moment.

The set list featured a good mix of the entire career of the band, from debut album gems likeDeuce and Black Diamond to crowd  pleasers like Calling Dr. Love, Lick It Up and Shout It Out Loud.  Even more contemporary KISS tunes like Psycho Circus and Hell Or Hallelujah were on tap for the night.  But what made the evening special for many die hard KISS fans was the inclusion of what some would call a deep cut from the iconic Destroyer album, the seldom played Flaming Youth!

Although the ballroom was small, checking in at only 3000 capacity, all of the elements of a classic KISS show were on deck.  The levitating drum riser, smoke, fire and bombs, although on a smaller scale, proved to do the job in the small, packed house.

For the uninitiated, a rock band might be strange fare here at SHOCK, but this is no ordinary rock band.

The Starchild, The Space Man, The Cat Man and The Demon, collectively known as KISS, quite possibly have the four most recognizable faces on Earth.  Founding members Gene Simmons and Paul Stanley have explained many times that they tried to create the band they always wanted to see onstage.  A band that was larger than life and like no other.  All founding members pulled from their own personalities and interests to create the characters.  Simmons character, The Demon, was conjured from his love of the monster movies of his youth.  His trademark onstage antics of  fire breathing, vomiting of blood and flying high above the audience, are like scenes from a classic horror film.  Each night they perform, the current line-up of KISS still dons the same iconic kabuki-style make-up they became famous with years ago, yet some of the men underneath the paint have changed.  Although still considered new guys by many, Tommy Thayer and Eric Singer have been in the band at this point longer than two of the bands founding members.  This incarnation of KISS is every bit as powerful and musically spot-on as any in the bands 40 year history.

This should not be thought of as half a band with some replacements.

Instead, they should be thought of as KISSstill the hottest band in the world!