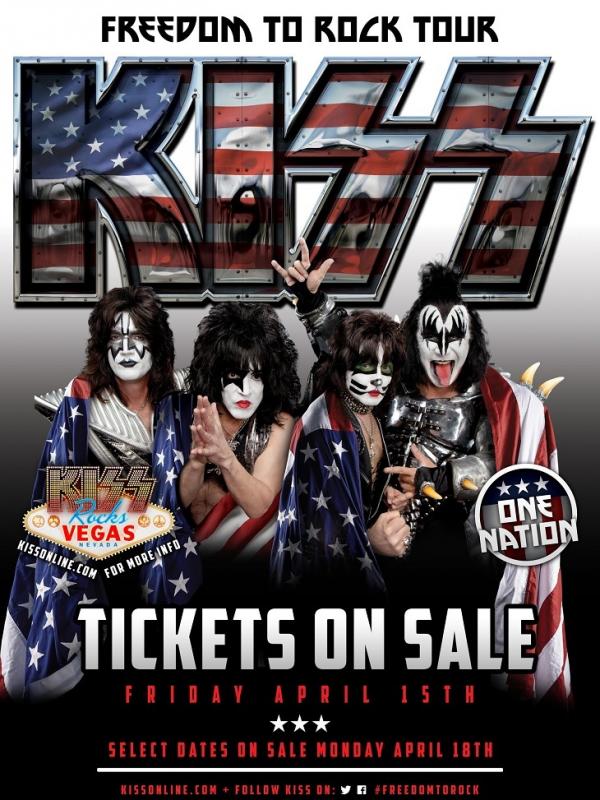 Americas # 1 Gold Record Award Winning Group of all time KISS, has announced its 2016 Summer American Freedom To Rock Tour and will visit 36+ cities nationwide with more markets being announced soon. The long-awaited & highly anticipated Freedom To Rock Tour will kick off on July 7th in Boise, Idaho and will travel the country throughout July and August and will close September 10th in Huntington, West Virginia. Tickets will go on sale beginning Friday April 15th for all concert dates (The Grand Rapids, MI and Youngstown, OH shows go on sale Monday April 18th). A KISS ARMY Fan Club Exclusive Presale will begin April 12th.

The KISS Freedom To Rock Tour will bring epic rock to 25+ cities it hasnt been to in over 10+ years and four brand new cities as well. KISS specifically wanted to take the Freedom To Rock Tour to its fans in markets that havent had the chance to see them in some time or ever at all. This 36+ city tour will rock those markets and allow fans across the country to see Americas favorite rock band of all time, KISS.

** Additional markets to be announced soon