Eric Singerâs Revenge: Two Decades on with the Hottest Band in the World 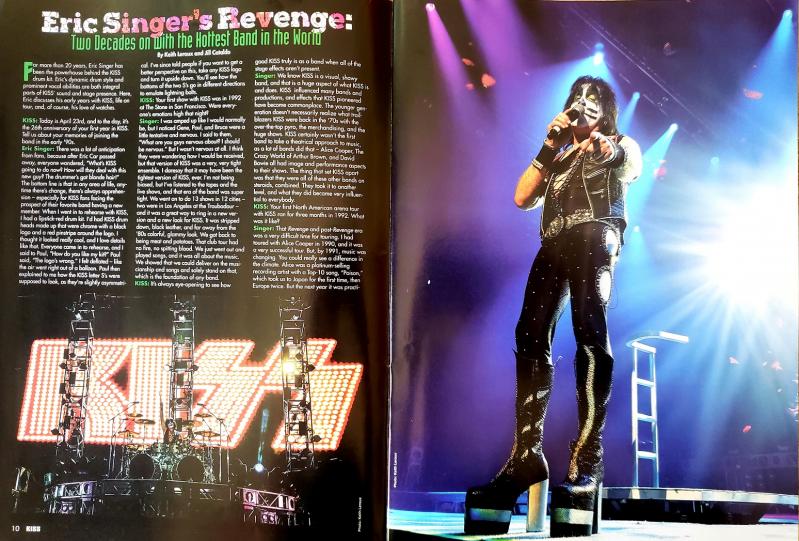 By Keith Leroux and Jill Cataldo

For more than 20 years, Eric Singer has been the powerhouse behind the KISS drum kit. Eric’s dynamic drum style and prominent vocal abilities are both integral parts of KISS’ sound and stage presence. Here, Eric discusses his early years with KISS, life on tour, and, of course, his love of watches.

KISS: Today is April 23rd, and to the day, it’s the 26th anniversary of your first year in KISS. Tell us about your memories of joining the band in the early 90s.

Eric Singer: There was a lot of anticipation from fans, because after Eric Carr passed away, everyone wondered “What’s KISS going to do now? How will they deal with this new guy? The drummer’s got blonde hair!”  The bottom line is that in any area of life, anytime there’s change, there’s always apprehension – especially for KISS fans facing the prospect of their favorite band having a new member.

When I went in to rehearse with KISS, I had a lipstick-red drum kit. I’d had KISS drum heads made up that were chrome with a black logo and a red pinstripe around the logo. I thought it looked really cool, and I love details like that. Everyone came in to rehearse, and I said to Paul, “How do you like my kit?”

I felt deflated – like the air went right out of a balloon. Paul then explained to me how the KISS letter S’s were supposed to look, as they’re slightly asymmetrical. I’ve since told people if you want to get a better perspective on this, take any KISS logo and turn it upside down. You’ll see how the bottoms of the two S’s go in different directions to emulate lightning bolts.

KISS: Your first show with KISS was in 1992 at The Stone in San Francisco. Were everyone’s emotions high that night?

Singer: I was amped up like I would normally be, but I noticed Gene, Paul, and Bruce were a little tentative and nervous. I said to them, “What are you guys nervous about? I should be nervous.” But I wasn’t nervous at all. I think they were wondering how I would be received, but that version of KISS was a very, very tight ensemble. I daresay that it may have been the tightest version of KISS, ever. I’m not being biased, but I’ve listened to the tapes and the live shows, and that era of the band was super tight.

We went on to do 13 shows in 12 cities – two were in Los Angeles at the Troubadour – and it was a great way to ring in a new version and a new look for KISS. It was stripped down, black leather, and far away from the 80s colorful, glammy look. We got back to being meat and potatoes. That club tour had no fire, no spitting blood. We just went out and played songs, and it was all about the music. We showed that we could deliver on the musicianship and songs and solely stand on that, which is the foundation of any band.

KISS: It’s always eye-opening to see how good KISS truly is as a band when all of the stage effects aren’t present.

Singer: We know KISS is a visual, showy band, and that is a huge aspect of what KISS is and does. KISS has influenced many bands and productions, and effects that KISS pioneered have become commonplace. The younger generation doesn’t necessarily realize what trailblazers KISS were back in the 70s with the over-the-top pyro, the merchandising, and the huge shows.

KISS certainly wasn’t the first band to take a theatrical approach to music, as a lot of bands did that – Alice Cooper, The Crazy World of Arthur Brown, and David Bowie all had image and performance aspects to their shows.

The thing that set KISS apart was that they were all of these other bands on steroids, combined. They took it to another level, and what they did became very influential to everybody.

KISS: Your first North American arena tour with KISS ran for three months in 1992. What was it like?

Singer: That Revenge and post-Revenge era was a very difficult time for touring. I had toured with Alice Cooper in 1990, and it was a very successful tour. But, by 1991, music was changing. You could really see a difference in the climate. Alice was a platinum-selling recording artist with a Top-10 song, “Poison,” which took us to Japan for the first time, then Europe twice. But the next year it was practically crickets at the show.

Grunge killed the rock scene, and I saw it firsthand in 1991 that summer with Alice on the Operation Rock And Roll tour. It was Alice Cooper, Judas Priest, Motorhead, Dangerous Toys, and Metal Church. I remember we played Chicago’s World Music Theater, an amphitheater that holds 28,000 people, but there were only about 2500 people there -- in Chicago on a five-band bill! You could clearly see that things had changed, and the market was not the same anymore. People just weren’t going to shows, and all of the music that had been so popular suddenly wasn’t. After ’91, Alice did not do a full tour again until 1996. That’s how tough it was.

So, with me coming into the KISS as the new guy was in that climate. The Revenge album was very well received by fans and critics. The first two singles were Gene songs too, which had never happened before, and yet in that climate, it was very tough. We toured, and we did the best we could.

KISS: Fortunately, things began to turn around for rock and roll a few years later.

Singer: Yeah, the climate started warming back up. In the summer of 1995, we started the KISS convention tour, which of course led to the reunion. By ‘96, Alice was back touring too, and he’s toured every year since. It was a serious dry spell though, not only for KISS, but for everyone. It’s disingenuous to me when people blame one band or another for having a tough time when all bands were suffering from about ’91 to ’97 – unless you were a grunge band.

KISS: In 2001, you rejoined KISS, and you’ve been at home with them ever since. How different was it for you to return to the makeup version of the band?

Singer: Well, putting the makeup back on really turned it into the monster that KISS is, no pun intended...

To read the rest of this interview & others , order your copy of KISS: The Official Magazine Issue #2 at https://officialkissmagazine.com/