AUSTRALIAN TOUR CANCELLED DUE TO ILLNESS 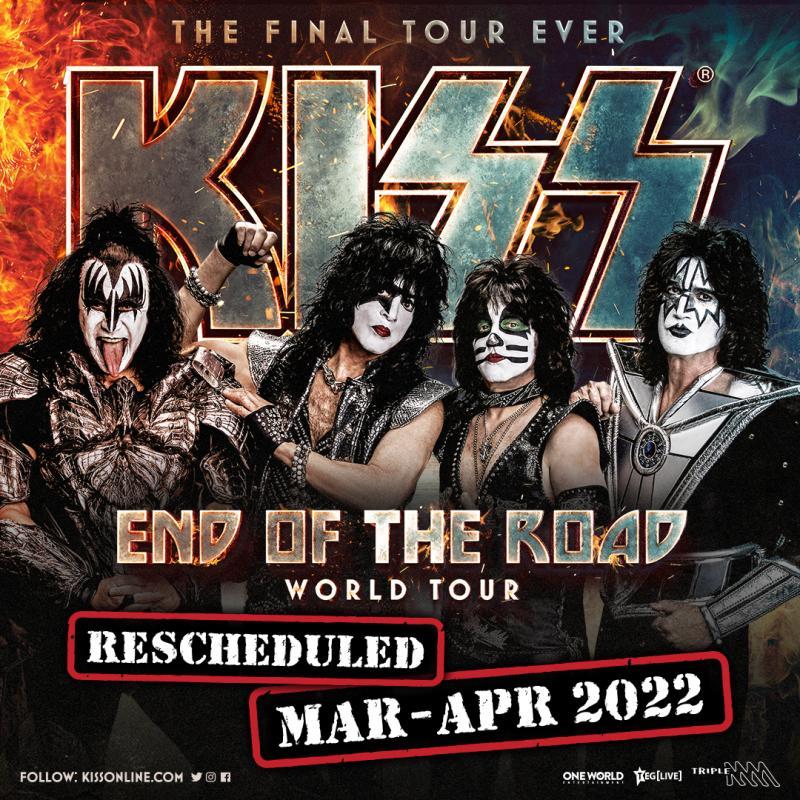 Promoters One World Entertainment and TEG Live today announced that the KISS Australian tour, due to commence next Tuesday, has been cancelled due to illness.

KISS and both promoters are absolutely gutted by the news and sincerely apologize to fans.

Earlier this week it was announced that U.S doctors had advised Paul Stanley to rest due to a bad case of influenza, prompting the rescheduling of the tour’s first show in Perth to the end of the run and the cancellation of New Zealand.

It was hoped the extra few days rest would allow Stanley the chance for a complete recovery so the tour could proceed as planned.

However unfortunately this has not occurred.  Stanley has an additional infection in his throat requiring complete vocal rest and medication for at least two weeks and possibly longer.

Paul Stanley said: “Words cannot begin to convey our massive disappointment in having to cancel our End Of The Road tour of your incredible country.  Our connection to you is unparalleled and decades deep.

“We waited as long as we could and held out hope to the last minute that my situation would clear up and we would be able to march forward. Doctor’s orders ultimately have taken precedence and finally we now find ourselves with no choice but to surrender. With heavy hearts, KISS.”

With all concerts heavily sold and side view tickets released to cater for demand, to say the ‘End Of The Road’ shows were eagerly-awaited is a massive understatement. KISS was also scheduled to perform at the after-race concert at the Supercars Newcastle event on November 23.

Promoters One World Entertainment and TEG Live said: “We are devastated with the cancellation of the Australian tour. We’ve been in constant contact with the band in the past few days hoping for a positive outcome. We know how much fans were looking forward to the tour.  We send our best wishes to Paul for a speedy recovery.”

REFUNDS
Tickets purchased by credit or debit card will be refunded in full (including ticket insurance premium, if relevant) and patrons do not need to take any action. Patrons should allow up to 10 working days for the refund to appear in their account.

Patrons who purchased tickets in an Agency using cash or EFTPOS will be contacted via phone in the next 15 days to arrange for a full refund. Alternatively, you can contact Ticketek here.

For Supercars Newcastle 500 tickets the concert portion will be refunded, being $65 for Gold tickets and $115 for One Last KISS tickets. All refunds will go back to the credit card it was purchased on by the 6 December.